Lung disease in 20pc of Qld stonemasons - About one in five stonemasons in Queensland have a potentially deadly lung disease.
Platypus at risk of extinction: Aust study - Koalas have been pushed to the edge of extinction and researchers are warning another iconic Austra ...
Gunman kills two Hawaii police officers - Two Hawaii police officers have been fatally shot by a man who authorities believe later died in hi ...
China confirms 139 new cases of virus - China has reported 139 new cases of pneumonia over the weekend, caused by the outbreak of a new cor ...
Broader investment focus for northern Aust - The government will look to update a 20-year development plan for northern Australia to pursue clos ...
Morrison lashes NSW minister over climate - Prime Minister Scott Morrison has taken an extraordinary personal swipe at a NSW Liberal government ...
Business rallies for Vic fire-hit regions - More than 100 businesses and sporting bodies such as the AFL will hold meetings, events and confere ...
NDIS review targets wait times, red tape - The Morrison government has accepted changes must be made for "frustrated" participants o ...
Dead, injured roos spark NSW police probe - A dead kangaroo found in the NSW Hunter region along with two others that were badly injured appear ...
Researchers want the Open dates be moved - The Australian Open should be moved to a shoulder season or extended by a week to avoid extreme hea ...

Some EB Games stores are set to close! 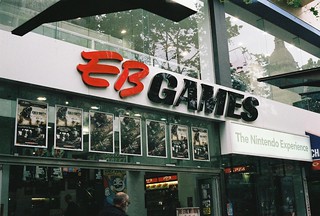 Some stores are closing, but there are some massive savings!

Some local EB Games stores have been sending out notices telking customers that they will be closing. This is very sad news for all those games who rely on EB Games for thier new releases and old classics.

OzBargain has released a list of possible stores getting shut down...

Check out more from PowerFM